A value-add office building in Glendale sold to a local accountant for $5.8 million, or $91.82 per square foot.

Monica Wiley“Monaco Tower has seen positive leasing activity for the past several years as tenants have been seeking quality office space outside of the Cherry Creek area,” said Monica Wiley of CBRE’s Denver office, who represented the seller with CBRE’s Jeff Wood. “The seller worked diligently to improve the property and secure tenants, ultimately stabilizing at 91 percent occupancy. We also rebranded the building as Monaco Tower, opting for a more recognizable name based on the location.”

Monaco Tower is located in the Interstate 25/Colorado Boulevard submarket. It has visibility from Leetsdale Marketplace and Monaco Parkway, and is surrounded by neighborhood amenities including shopping, restaurants and entertainment.

The Class B building is leased to 16 tenants, including New America College and the AFL-CIO.

“The previous owner did a great job maintaining and putting money into it,” said Greg Titus of Pinnacle Real Estate Advisors, who represented the buyer. Titus said Borgers, who intends to own the building long term, plans minimal, cosmetic improvement to the property. “He wants to bring the expenses down and maximize the value on the building,” Titus said. 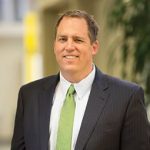 Borgers owns similar, smaller Class B and C properties in the Denver market and was ready to take on a larger asset, according to Titus. “He has familiarity with that type of product. “He’ll be a good owner for that type of product, without a doubt,” Titus said.

The building previously sold for $6.2 million. It was 100 percent occupied at the time with rents above market, Wiley said. The current occupancy exceeds the submarket’s first-quarter average occupancy of 87.2 percent, according to CBRE, and includes tenants ranging in size and lease term.